Anthony Peake – Déjà vu – Have We Experienced THIS ALL Before?

Esteemed consciousness researcher and spiritual philosopher Anthony Peake is certainly no stranger to the high “strangeness” of reality. He’s made a life out of exploring the true nature of our cosmos with no limits and no boundaries.

In his latest book, The Hidden Universe – An Investigation into Non-Human Intelligences, he plunges the depths of reality in a way rarely approached. And though this interview was scheduled based on the launch of this book (and a planned meet up at the 2020 Contact in the Desert – Now postponed) …we couldn’t escape this new reality we’re all experiencing and how his hypothesis strangely relates.

What started out as a proper overview of Anthony Peake’s book “Hidden Universe” turned out to be anything but – BUT it was just what we all needed…a deep dive into how the “hidden” aspects of universe (and of self), may give a clue as to the why and how of what we are experiencing right now!

Ask yourself this… Is there something about this new and unfamiliar reality we’re living in that seems, paradoxically, familiar? After you listen to this, you’ll be asking yourself this important question. 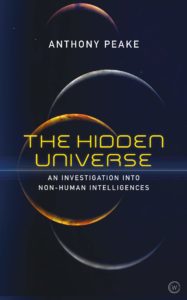 Anthony Peake was a curious child. While his friends were reading Batman and Superman comics Anthony was immersing himself in learning of the most arcane nature (whilst still keeping an eye on the X-Men and Dr. Strange). It was in 1966, at the age of twelve that he, quite by accident, came across a copy of The Sky People by Brinsley Le Poer Trench and from then on there was no stopping him. The British part-series Man Myth and Magic was read with intense interest followed by the discovery of John Keel’s Project Trojan Horse and Jacques Vallee’s Passport to Magonia. What followed was a voracious, and unquenchable, need to know everything about everything.

At university he chose courses that would accommodate his wide interests, specialising in the sociology of religion, the theory of language development and the art of the Italian Renaissance. A post-graduate course in management lead Anthony away from his calling as a writer and into a career as a manager in various UK businesses. His interest in the esoteric continued with a growing fascination for quantum physics and neurology developing over the years.

Read his full bio and visit his website HERE