How to Find Happiness – It’s ALL in Your Mind!

Happiness can be triggered by shifting our emotional state. Here’s how I did it and the amazing synchronicity that followed.

Feelings are the key to comprehending this universe. Until you get the right key, you can’t unlock the secrets hidden right in front of you.
― from Cynthia Sue Larson’s Karen Kimball & the Dream Weaver’s Web

Sometimes I feel inspired to break up my daily routine by wearing something different, doing something different, or feeling a bit different in accordance with intuitive prompts and nudges. For example, just the other day, I felt inspired to feel as if it was my birthday. There was no rational reason for me to be feeling a birthday vibe that day, since my birthday came and went back in January. The first thing I noticed about adopting a feeling of “It’s my birthday!” was that instead of feeling I was trudging through tedious daily duties, I told myself, “Now I get to read a book while luxuriating in a nice, hot bath… because it’s my birthday!” and “Now I get to have fun doing some genealogical research… because it’s my birthday!” I consequently felt very happy, even though I was fighting off a low-grade cold. And somehow, most of the things that truly needed doing were taken care of too.

I continued feeling the happy birthday mood for a couple of days, luxuriating in a sense of inner satisfaction and joyfulness while doing simple tasks that included house cleaning, weeding the garden, touching up paint around the house, and liberal doses of  just for fun activities.  As it occurred to me in the back of my mind that being happy for no reason tends to bring about good fortune, I also enjoyed rediscovering that being happy for no reason brings about happiness, which is definitely its own reward! 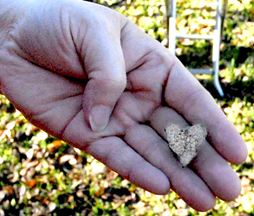 A couple of days into my happy birthday mood, I found a small heart-shaped rock that had been missing since the very day my friend gave it to me for my birthday in January. I’d had a chance to hold it in my hand and admire its beautiful shape, and then at some point between holding it and cleaning dishes off the the table, it mysteriously vanished. My friend and I searched the house and our pockets, and I kept searching for some days afterward, with no luck. I trusted that the rock would reappear at some future point. My friend had found the heart shaped rock in a park by her father’s house, and I’d seen a picture of her holding the stone in her hand on the day she first found it, so despite having lost it, I had a photograph to help me remember what it looked like.

And then, on one of my happy birthday days in September, after washing a load of laundry, there it was at the bottom of the washing machine! I thought at first that maybe it had fallen out of my jeans–but none of the clothes I had worn on my birthday eight months earlier were in that load of laundry. In fact, it was just a load of mostly towels and exercise clothing. I had extensively searched all the clothing I wore on the day of the heart rock’s disappearance, as well as literally looked on and under every dish, placemat, and chair. Everyone present had searched the room while we were reasonably certain the stone couldn’t have gotten too far away and yet we’d come up empty-handed.

And now, eight months and a couple of weeks later, here was that very same lovely heart-shaped rock at the bottom of my washing machine on a day when for the first time since the day I’d gotten 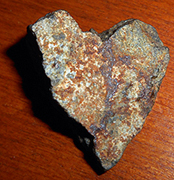 that stone I was feeling in a happy birthday mood! I took a picture of the rock in my hand in a pose somewhat similar to the first picture of this rock on the day my friend found it, and despite a bit of a difference in color, which is likely due to a combination of being cleaned and having dirt washed off in the washing machine, and some rusting occurring with the water washing. It looks identical!

I invite you as you read through the reality shift experiences in this issue of RealityShifters to consider how you might change your daily routine to feel some new emotions that feel energizing for you such as feeling like its your birthday. It’s fun to find out how good it can get when in a happy-for-no-reason mood!

Cynthia Sue Larson is a contributing writer for Higher Journeys.com. A best-selling author, researcher, and transformational speaker, Cynthia helps people visualize and access whole new worlds of possibility. Cynthia hosts Living the Quantum Dream on the DreamVisions7 radio network. She has been featured on the Discovery Channel, the History Channel, Coast to Coast AM, and BBC, and has presented papers at international conferences on science, spirituality, and consciousness.

The Best Sound For Boosting Your Immune System

Law of Attraction – There’s Much More to the Story!