Linda Moulton Howe – Who & What Are Embedded Beings?

Courageous…Brilliant…Thorough…Relentless. These are just a few words to describe award-winning investigative journalist Linda Moulton Howe, and the reason why she was recently honored in Los Angeles with the coveted Lifetime Achievement Award at the 14th Annual Conscious Life Expo.

Shortly after she accepted that honor, I had the privilege of sitting down with Linda to discuss some of the many facets to that which she has spent years dedicating her professional career to and that’s the mystery we call the ET/UFO phenomenon.

In the short 30 minutes we had to talk, we managed to get into an area as elusive, if not more so, than all of those other facets to this great mystery – something she calls “embedded beings.”

What are they and why are they seemingly implanting themselves into a number of humans walking this earth?

Although we came to no definitive conclusion during our discussion, I think it’s fair to say we managed to keep the topic open for future inquiry and exploration.

Explore Highlights from this episode:

Linda was kind enough to share this image with the Higher Journeys viewing audience: an image drawn by one of the massage therapists (experiencers) depicting her encounter with an “embedded being.” 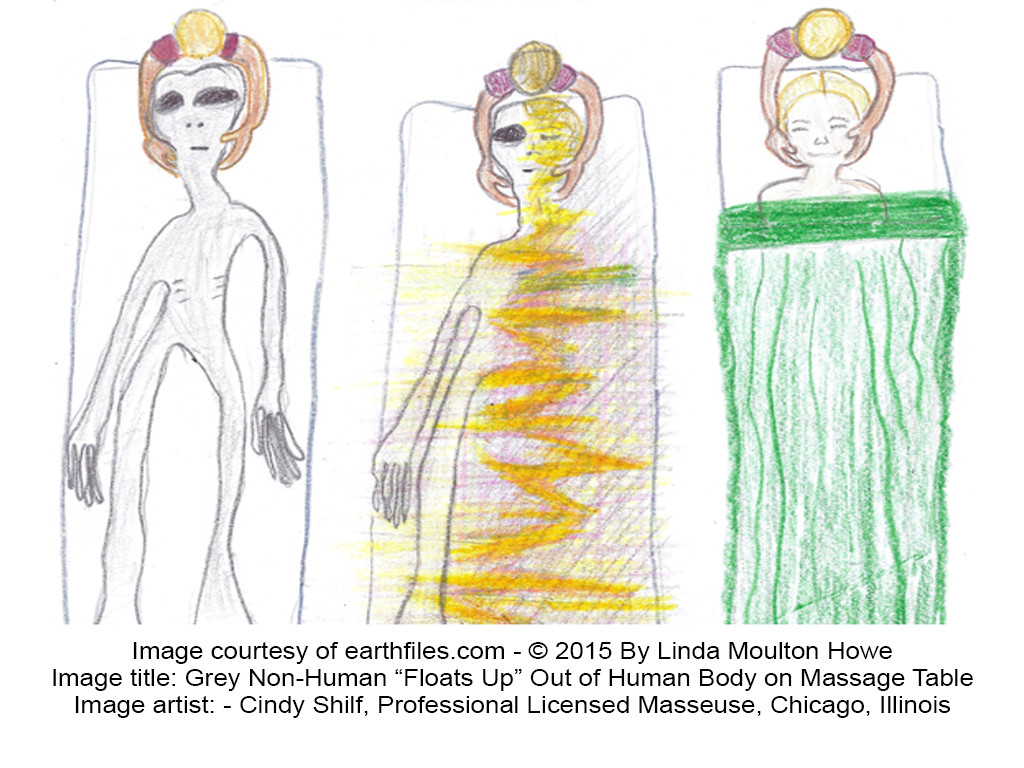 Linda Moulton Howe is a graduate of Stanford University with a Masters Degree in Communication. She has devoted her documentary film, television and radio career to productions concerning science, medicine and the environment.

Ms. Howe has received local, national and international awards, including three regional Emmys and a national Emmy nomination. Those films have includedPoison in the Wind and A Sun Kissed Poison which compared smog pollution in Los Angeles and Denver; Fire In The Water about hydrogen as an alternative energy source to fossil fuels; A Radioactive Water about uranium contamination of public drinking water in a Denver suburb; and A Strange Harvest which explored the worldwide animal mutilation mystery which has haunted the United States and other countries from the mid-20th century to date.

Linda was honored with the Colorado Florence Sabin Award for “outstanding contribution to public health” and received three regional Emmys for Writing Achievement, Directing and Sound Editing for her documentary investigations: Fire in the Water, A Radioactive Water and A Strange Harvest.

Linda also received Ohio State Awards for Fire in the Water and Borrowed Faces and actor Robert Redford, founder of the Sundance Film Festival and prominent environmentalist, presented Linda with a Citizens Participation Award from the U. S. Environmental Protection Agency for television documentaries about air pollution and energy alternatives to fossil fuels.